This article in Scientific American appeared in 1922

An Invention That May Reduce the Size of Our Books to a Fraction of Their Present Bulk
By S. R. Winters 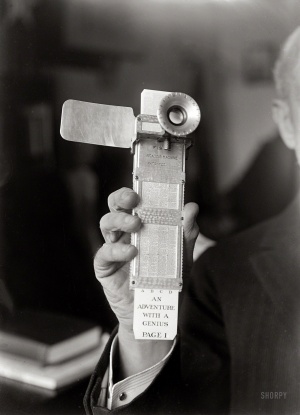 VOLUMINOUS periodicals, Involving the expenditure of billions of dollars annually in printing and acres and acres of space in which to store as embodied In the present art of printing may be revolutionized by an invention of Rear Admiral Bradley A. Fiske of Washington, D. C. Labeled as the "Fiske Reading Machine," a patent has been granted the inventor. The device is simplicity and compactness personified, lending itself to easy carriage in one's coat pocket.

The instrument, consisting of a tiny lens and a small roller for operating this eyepiece up and down a vertical column of reading-matter, is a means by which ordinary typewritten copy, when photographically reduced to one-hundredth of the space originally occupied, can be read with quite the facility that the impression of conventional printing type is now revealed to the unaided eye. The device is only six and one-quarter inches long, one and seven-eighths inches wide, one-quarter of an inch thick, and weighs five and one-half ounces.

More about the details of the machine, which consists of four parts: There is an extremely light frame, composed of aluminum. A strip of paper is a carriage for the photographed lettering, which lies In a longitudinal groove in the frame. A tiny lens, capable of magnifying the characters ten times, brings the lettering into prominent review. A roller, really the only mechanical part of the contrivance, serves the purpose of moving the strip of paper along a groove In front of the lens. The forefinger of the hand holding the frame acts in this capacity. The lettering, reduced ten times Just us the lens has a magnification of equal capacity, is imprinted on a narrow strip of paper which may be moved at will in front of the lens at a fixed distance there-from. These tiny representations or characters are printed from a copper block on which have been photo-engraved, on a reduced scale, common typewritten matter. The process operates in the absence of type and involves no typesetting. However, this novel system renders it possible to photo-engrave books already printed and likewise publish reduced copies at a nominal expense for use in the "Fiske Reading Machine." 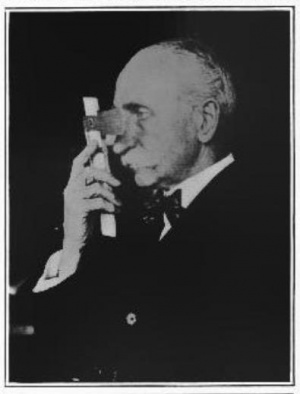 Answering frequent inquiries to the effect, "Does the use of this machine tire your eyes," Admiral Fiske likens the effect thus expended to that of reading ordinary lettering with the unaided eye. The characters appear plainly by reason of the lens magnifying them to the same extent that the photographic process reduces them. The structural features of the instrument make it imperative that the characters remain at a uniformly correct distance from the eye. Admiral Fiske. In answering the suggestions of the possibility of the Instrument causing jaded eyes, throws out the reminder that engravers toil incessantly at their occupations which is of striking similarity to reading by this machine. When rending the operator holds the device in front of either eye, propelling the paper in such a manner that it facilitates reading of the representations as is characteristic of reading a book or news paper. A blinder, attached to the machine, can be operated in obstructing the view of the unused eye. The strain of employing both eyes is thus obviated. Unless the light is dim, one eye is adequate to the needs of reading. The use of both eyes will doubtless involve the construction of a unit of the reading machine more elaborate than the present design.

The dispatch with which one can read when using the "Fiske Reading Machine" is remarkable. At a single glance through the lens one hundred and twenty words are revealed to view. Admiral Fiske, In demonstrating his invention to the writer, read aloud at a rate of 239 words a minute. The writer, in turn, in giving the machine a trial demonstrated read, in silence, 287 words a minute by actual count. The strip of paper containing the lettering is chockful of words —10,000 on each side, to be exact. Thus, five such strips, with characters on both sides, would contain 100,000 words, in excess of the number possessed by an ordinary book or magazine. More graphically expressed, perhaps, is the comparison between a package of these strips and the cumbersomeness of a standard dictionary. The latter contains approximately 2,850 pages, weighing about 20 pounds: while 475 strips, two inches wide and nine inches long, could incorporate the contents of a bulky dictionary. The weight of these strips of paper would be only two and a half-pounds or about one-eighth of that of a standard dictionary.

Literally, tons of books are annually published in the United Stales as reference guides with no object of being read. The "Fiske Reading Machine" would cut the mounting costs of paper and printing Involved in this task of magnitude. Similarly, millions of dollars are spent by the Federal government in the publication of bulletins that are never read, and their storage exacts a further toll in the form of valuable space. The invention being described would authorize drastic economies in these instances. Other possibilities outlined in behalf of the "Fiske Reading Machine" were sketched for the writer of this article by the inventor as follows:

1. The cost of manufacturing books. magazines, weeklies and perhaps newspapers will be so reduced that 10,000 copies of one of average size, containing about 100,000 words, can be manufactured and sold to a publisher, for four cents each. If 100,000 copies are issued, they can be sold, of course, at a price much less.
2. Since the best quality of paper must be used, books, magazines and newspapers used in reading machines will last indefinitely. At present, they begin to get discolored and to crumble in a few years.
3. The amount of paper needed for printing any number of words will be diminished to about one-sixtieth of what is needed now.
4. An ordinary book, magazine or weekly us reduced can he sent by mall for one cent, singly.
5. The work of mailing books, magazines and weeklies will be enormously reduced, and the transmission of mail by airplane much facilitated.
6. The space needed for keeping books, magazines and documents will be enormously diminished.
7. The cost Of manufacturing magazines, weeklies and newspapers will be so greatly reduced that, In all probability they can be given away; assuming that advertisers will continue to pay as at present.
8. Smaller presses will suffice, and therefore less capital will be required.
9. Books of reference, such as encyclopedias and dictionaries: standard books like the Bible and the works of Shakespeare and other preeminent authors, can be sold for prices much less than their present prices.
10. Eye-glasses and spectacles will not be required for reading.
11. The diffusion of knowledge will be greatly facilitated because even the poorest people will be able to buy the most instructive and entertaining works.

The "Fiske Reading Machine" Is the product of two years of creative effort of the inventor. His original attempt to devise a machine for easy reading is apparently fruitful of achievement. Somewhat of a coincidence, may it not be considered, that this invention of revolutionary possibilities has been Introduced at a time when a scientific world Is discussing a book, "Invention the Master-Key to Progress," also a product of Rear Admiral Bradley A. Fiske? His creative genius, so wonderfully productive while in the service of the Navy, is not inactive, now that retirement is a fact.