The nanocrystal test display from QD Vision (called QD-LED) contains about 2,000 monochrome pixels. In the future nanocrystal displays will be flexible and brighter than any displays currently available. However, as the technology evolves, it probably won’t be until later this decade or early next decade before nanocrystal displays would have a chance to be a significant force in the display market.

A QD (quantum dot) is also called a semiconductor nanocrystal or an “artificial atom” because they have an energy level similar to an atom. These energy levels yield the color you can see in a nanocrystal display. 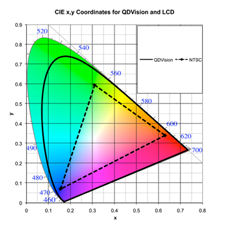 Vibrant colors. Nanocrystal displays would yield more purity in colors than other types of display technologies. Some display technologies, such as LCDs, can’t create a pure red, green, or blue for the display; instead, they need to add a few other colors to those three to display pure colors. Quantum dots, on the other hand, create pure red, green, and blue to create all other colors.