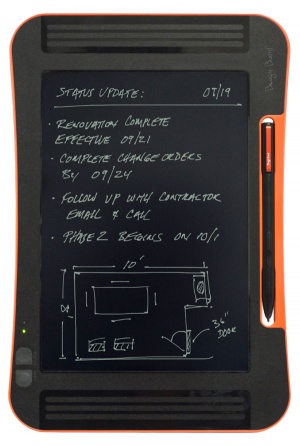 Boogie board is an LCD eWriter that is intended to replace a blackboard or slate tablet. It is a paperless memo pad

A Boogie board is an Reflex LCD slate that you can write on with a pressure stylus or even your finger. All of the models above are similar except the Sync 9.7 and blackboard which are described below. The slate is not a smart device and nothing recorded on the slate is remembered nor is it editable except to add more lines. If it is erased it is lost forever. There is an erase button provided and it will always erase the full screen. (Most models have a lock to prevent accidental erasure.) It is truly electronic paper for use as a scratch pad. Some of the models have a replaceable battery and some do not but the battery will last a long time as it is only needed to erase the screen.

The numbers listed on the various models represents the approximate diagonal measurement of the slate display.

The Sync 9.7 is different in that the stylus used to write the data is special in that it records the strokes as they are written. These strokes are recorded as vector graphics and stored in the device as images. Only lines written using this stylus will be recorded. These lines a stored as vector images in a PDF file and can be transferred to a computer, tablet, or phone using Bluetooth. In this way your notes and drawings can be preserved. The slate table itself is only a visual representation. Lines can be drawn on the slate but unless the special pen is used they will not be recorded. Additional replacement pens are available.

There is also a Boogie Board Sync Mobile App. This is a free Sync mobile app to view and share files created with the Boogie Board Sync on your Bluetooth enabled device. Available on the App Store and Google Play. This software can work with the Evernote app.

An SDK is available for iOS and Android developers.

There is also a RIP 9.5 in the marketplace. This is an older version of the Sync 9.7 and is no longer offered by the manufacturer.

Blackboard is a larger model of the Clearview Jot. It had a full 8.5" x 11" letter size semitransparent display. It includes several templates that can be placed behind the screen to provide an underlying surface to use as a backing. This is the first model to have an eraser that can remove local lines. A blackboard app can be used to capture the images as drawn. The app is available for both iOS and Android.

Can be placed over any surface and 'write' on top of it; for example a map, a music score sheet, a floor plan, even a tablet screen.