This section covers what facilities are available for the user to customize the look-and-feel aspects of calibre2opds. It is most likely to be of interest to those who make heavy use of the HTML versions of the catalogs.

The topics covered are:

Note that this section does not cover options that control the structure of the library such as the sections that should be generated; the rules for splitting by letter; page sizes and so on. This sort of setting is controlled by the options that the users can set within the GUI and is not amenable to change beyond what can be specified there without altering calibre2opds source code.

Reasons for wanting to do customization can vary widely, but some of the commonest ones will be:

The look and feel of the HTML catalogs can be customized far more highly. You can alter the XSLT template that is used to generate the HTML from the XML catalogs, and you can also provide runtime stylesheets to replace the ones that are shipped as part of calibre2opds.

If users take advantage of this capability it would be nice if they could feed back examples of what they have achieved so that other users can see what is possible. In fact we would be more than happy to include alternative stylesheets as part of the standard distribution if anyone produces any interesting ones.

Calibre2opds has a built-in list of the book formats that it recognizes, and the associated mime types that should be set for download links. For more details on how you can add additional formats to those that are recognised by default see the later section on Mime Types.

This is covered here just to point out that it is not necessary to do any of the customization covered in this section of the documentation simply to add new external links to the top level of a calibre2opds generated catalog. One can do this by setting up entries on the Custom Catalogs tab in the GUI based configuration.

These external links can be one any of:

[edit] Calibre2Opds catalog as part of an frameset

An example of how one might do this is as follows: 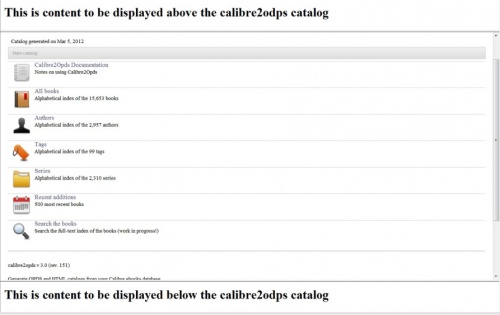 [edit] Where should customized files be located

Calibre2opds will search for files that are on its customizable list in the following locations (in the order specified):

If a file exists at more than one of the above locations then the first one that is found is used. To over-ride the built-in version the user must put their customized versions in one of the locations that are checked before the built-in versions are used. for most cases it would make no difference whether the calibre2opds configuration or install folders are used. Both are provided simply to allow the user to use whichever is the most convenient.

Note that whenever calibre2opd uses a user supplied resource then this information will be written to the log file. This allows the user to check that their resource is being picked up by calibre2opds, and also allow calibre2opds support to see if the user is not using the default files (and thus possibly causing an error in calibre2opds).

[edit] Files that can be customized

The master copies of files that can be customized (i.e. the ones that are built into calibre2opds) can be obtained from the calibre2opds source code repository. These can be used as the starting point for any customization changes that you might be considering.

The following specifies which files can be customized to over-ride the calibre2opds built-in versions.

CAUTION: Any time that a new version of calibre2opds is made available then any customization changes that have been made should be reviewed against the new master copies of the files that have been changed. It is possible some change to the calibre2opds features might have meant that changes were made in the master copies of the files that mean that the user customization files need amending appropriately.

For most common file types there is general agreement on what is the valid mime type for that type of file. However in the ebook world there is less consensus as different vendors have used their own particular values so it is quite possible that the assumption Calibre2opds makes about the mime type for a file is not what the user actually wants.

Calibre2opds has a table that maps file extensions to the mime type to be used for files with that extension. This table can be over-ridden by a user supplied table. Reasonsfor such an over-ride might be:

The contents of the mime types table that Calibre2opds used for a particular catalog generation can be seen by examining the file mimetypes.txt that is output to the root of the generated catalog. This file is a simple text file that can be viewed and/or edited by any tool capable of handling such files. examining this file also shows the format of the entries to be used for defining new types.

The user can either add additional entries for to this file to get new formats recognized by calibre2opds, or change the mime type associated with any particular format. To get any such amended file used by calibre2opds in any future generate runs, the amended mimetypes.txt file should be placed in one of the locations calibre2opds checks for customization files that are defined below under "Where Should Customized Files be Located"

Note that minimal checking is done on the contents of this file other than that any lines not marked as comments contain at least two fields. The fields are separated by whitespace which can be one or more space or tab characters. Comment lines are indicated by starting a line with the # character. There are no checks such as whether duplicates are present, so be careful when editing this file.

Icons are the little images displayed against entries in the different catalog sections. The images are particular to the section they are being used in, and the type of entry.

Icons are expected to be in .png format and have a resolution of 48x48 pixels.

Note: Customized icon will only be used if the user has specified the use of External icon files in the Advanced tab of the calibre2opds settings. If this setting is not active then the built-in default icons will always be used.

One needs to be very careful when changing these files as changes that causes an error at runtime will cause a calibre2opds run to fail to generate the expected HTML catalog correctly. If such errors occur then an entry will be written to the Calibre2opds log file, but experience has shown that it can sometimes be tricky to identify exactly which line/statement in the XSL template has triggered the error.

The XSL templates are closely tied to the format of the XML files that are generated by Calibre2opds. If you are using a customized XSL template then when installing new releases of Calibre2opds you need to check that your customized version is still valid. There is a good chance that they will as the XML format has remained relatively stable during the lifetime of Calibre2opds but it is not guaranteed that no change will be introduced in the future to either fix a bug or to support a new feature. To help with managing this it is recommended that you always keep a copy of the Calibre2opds XSL template that your changes are based on. You can then easily check if this is different in any way from the one that is built in to the new Calibre2opds binaries you have just installed.

The CSS stylesheets are only used with HTML catalogs. They only take effect when the user is attempting to browse a catalog that has been generated by calibre2opds and have no effect on the generation process itself. They are used to determine many of the the look-and-feel aspects of the HTML catalogs.

The Javascript support functions are used to carry out tasks that can not easily be done directly in either HTML or CSS type stylesheets.