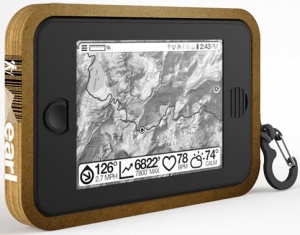 Earl is a 6" Tablet using an E Ink screen. It runs Android making it very suitable as an eBook reader. This device is unlikely to see the light of day. It would seem that it will never ship.

Meet Earl, a revolutionary tablet engineered for the most extreme of outdoor situations. Built for survival, Earl works where today's smart phones and tablets cannot. Style meets efficiency with Earl's intuitive design, fusing Android 4.4 together with an energy sipping E-Ink screen and the latest in GPS, weather sensor, and radio communication technology. With Earl at your side, stay in control of your journey no matter where it takes you.

From the web site.

Working together with cutting-edge motion, force and orientation sensors, Earl's GPS chipset gives you precise reading of your location, direction and elevation. Combine Earl with http://everytrail.com and have access to over 300,000 trails at your fingertips. Connect ANT+ or Bluetooth 4.0 devices to measure your heart rate, pace and cadence. Share your routes with friends using Android Beam™ technology. Rugged water proof case.

Always stay ahead of mother nature using Earl's internal weather sensors to accurately forecast changing conditions, even in the most remote locations. View current temperature, humidity and barometric pressure at a glance. A built-in compass will guide you in the right direction. Using GPS, Earl can tell you when and where the sun, moon and stars will shine the brightest.

Always prepared. Earl works with thousands of Android apps already available. With support for EPUB, MOBI and PDF e-reader formats, have access to all your favorite reads while you're on the trail. Developers will have access to a range of new sensors to create apps and interactive guidebooks built specifically for Earl using our open api. Upload, share and sell your creations through Earl's gear shop.

It is also a two-way radio (GRMS, Amateur in the US; 2 watts) and a AM/FM/SW/LW tuner. (a removable folding antenna included) Laminated solar panel provides up to 20 hours of battery (3000mAh). Earl charges in 5 hours in direct sunlight using high efficiency 22% mono crystalline solar cells. A USB lanyard is include which is useful for charging and exchanging data.

For Europe they will be releasing a VHF/UHF (2m/70cm) radio, however take note, users are required to be licensed. This is due to a CE requirement. For Australia and New Zealand, Earl will be available in two editions, a UHFCB radio, open to anyone without a license as well as the VHF/UHF variant which again would require operators to be licensed. For the USA and Canada they will be releasing both a Part 90 certified VHF/UHF radio for licensed amateur radio operators as well as a Part 95a GMRS version for the use by the public.