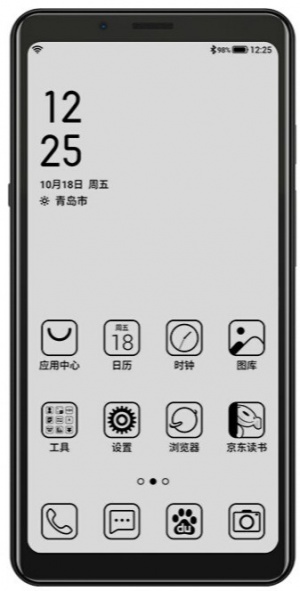 Hisense A5 differs from the Hisense A2 and Hisense A6 in that it only has a single E Ink screen but is otherwise a full cell phone including 2 cameras. See Hisense A5C for color version.

The Hisense A5 is an E-ink smartphone with 5.84-inch energy-saving monochrome screen. The HiSense A5 is powered by a 64-bit Qualcomm Snapdragon octa-core chipset and comes in two different variants and colors.

The 5.84-inch HD+ screen has a resolution of 1440 x 720 pixels and it is ideal for reading an ebook. The paper frontlight display comes with adjustable brightness for use in the dark, with all the pros of an E-Ink screen including a very low power consumption and that it never turns off. Like with any other ebook reader or kindle device, the screen has a low refresh rate with ghosting effect. Underneath the black and white screen is a Qualcomm Snapdragon processor with eight cores and a maximum clock speed of 2.0GHz. The SoC is paired with 4GB of RAM and an internal storage of 32GB or 64GB.

It has a microSD card slot, microUSB charging port, Bluetooth, Wi-Fi, OTG, a 3.5mm headphone jack, and a large 4000mAh battery with 5V/2A charging support. The HiSense A5 sports a 5-megapixel front-facing camera and a 13-megapixel rear camera with LED flash. The operating system of the Hisense A5 is Android 9 Pie.

The following eBook Readers have been reported as working well with this product.

The Hisense A5 appears to have become rather popular among many users on forum.xda-developers.com who finally found a way to reliably root the device. This way some users have managed to retroactively install the google framework and associated services, and others found ways to disable or even remove some of the built in vendor applications. Additionally, in order to easily unbrick any bricked device using official firmware release, at least two firmware versions are provided by separate users.