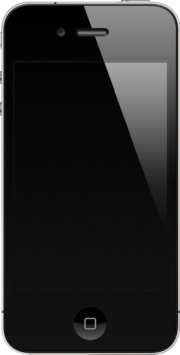 Front view of an iPhone 4.

The iPhone 3G model was announced by Apple on June 9, 2008. It added 3G cellular network capabilities and A-GPS location. The device was originally loaded with iPhone OS 2.0 which introduced an App store and third party Apps. The iPhone 3GS added a faster processor and a higher-resolution camera that could record video at 480p.

The iPhone 4 model was introduced on June 7, 2010. It featured a new design with flat sides and back, and glass on both the front and back. It introduced a 960x640 Retina display at 326 ppi. It also added a selfie camera at the front. It came with iOS 4 which included multitasking functionality and FaceTime video chat. Its new antenna design caused the device to lose its cellular signal if held in a certain way. This flaw came to be known as "antennagate". The iPhone 4S was similar to the iPhone 4 except it had a faster A5 processor and a higher-end rear camera.