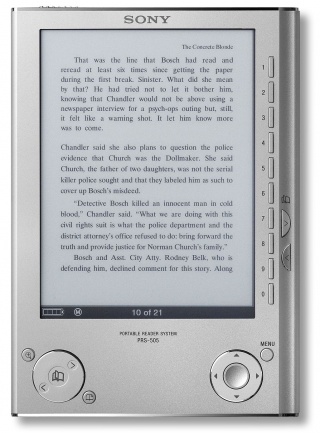 Michael Connelly's The Concrete Blonde on the Sony Reader.

The PRS-505 is a replacement for the previously released PRS-500. As compared to the PRS-500 the following improvements are noted. The PRS-505 has the ability to categorize books, the ability to connect to any USB port and look like a memory device / card reader, and the ability to fully charge from any USB port. The 505 has more color choices for the case, a whiter screen with more contrast, faster page turns, more gray scales (8 vs. 4) for better images, a better connect interface to the Sony store. It also has more memory internally and has better PDF support and support for ePUB.

The PRS-505 will not play games, surf the web, connect wirelessly, or show colors. It does not allow you to search within your books. It will not read text files that do not have a .txt extension, such as .cpp file. It does not have a back light. There are no internal speakers.

Pull it out of the box, and plug the included USB-A to USB-Mini-B cable into your reader and a PC. Let it charge a few hours. Then, unplug the charging cable and turn it on. If it stays blank, charge for another hour or so. You must unplug the charging cable to turn it on.
When you insert a card, there will be (very slowly) spinning arrows in a circle in the middle of the screen. This means the reader has stopped responding until it has read the contents of the card. You must wait until it finishes. Note that this reading process can take several minutes on a card with hundreds of books; memory sticks seem to be considerably slower than SD cards. If you have transferred new content to the card using something other than the Sony software, this content will have to be read and the file that caches metatdata updated; on a card with hundreds or thousands of books this can take an hour or more, and you may need to have a charger plugged in to avoid draining the battery during this process.

1. Lanyard connector
2. USB-Mini-B for charging & data. This can NOT be used to charge the reader while reading books on it. Also, not all USB-A to USB-Mini-B cables can be used to charge or access the memories in the PRS-505. Only cables that connect all wires can be used. Many cables omit power connections, and do not work with the PRS-505. Also, the PRS-505 is very picky about USB ports. It will work with some, but not with others. It will work with most PC USB ports, and not work with most non-pc ports. I suspect the difference is the voltage. If the PRS-505 is connected by USB, a USB icon will show on the screen. If the red LED lights up, it is charging. If the red LED is not lit, the battery is being drained, not charged while plugged into USB. [Note: if first shutdown, the PRS-505 will charge from a non-USB power source, a battery or AC converter.]
3. 5.2V tip positive for charging. This CAN be used to charge the reader while reading books on it. This accepts PSP chargers. This will work with the correct cable to charge the reader from USB ports that will not work with a Mini-B USB cable. When charging by this connection, a small lightning bolt will show on the display, the battery will (incorrectly) show fully charged, and the red LED will be on.
4. Headphone jack (standard, 3.5mm) (There are no internal speakers.)
5. SD Card, which the manual claims supports up to 2GB cards, while field reports claim capacities up to 4GB are supported. With firmware update, SDHC up to at least 8GB has been verified to work, but you must format the media with 64K clusters for reliable data access. DOS/Windows: FORMAT /FS:FAT32 /A:64K Linux: mkfs.vfat -F32 -s 128
6. Sony Memory Stick Pro Duo, which the manual claims supports up to 8GB cards. (8GB cards have been verified to work.) Note that this will not take Memory Stick cards, or Memory Stick Pro cards.
Every connector is standard, and it works as you would expect on any generic device.

There is some confusion over the card slots for SD and MSPD cards The PRS-505 (is different from the PRS-500 because it) can use both card slots and the internal memory (210.0MB) at the same time. That allows for over 10GB of storage in the reader.
When plugged into any PC with a USB port, the PRS-505 works as both a SD and a MSPD card reader/writer. The internal memory is also available as a drive letter.

Sony claims the PRS-505 will run for 7,500 page flips on a single charge. Turning on audio will drain the battery quicker than if it is not used or left off. Leaving the PRS-505 in standby mode (which happens when you hit the power switch) and never reading a single page, will drain the battery in less than a month. The solution is to charge it occasionally using a USB charger (or a PSP charger). After about 2 years you can expect the battery to last about 2 weeks, after 3-4 years, about 1 week (or a 75% drop in battery life).

Conversion from other formats

You can convert from other formats, such as CBR/CBZ, DOC, FB, HTM/HTML/RSS Feeds, & LIT using 3rd party software. Calibre is a program that can be used to convert many of these formats.

Option 1: Open the HTML file ina word processor and save it as a RTF file.
Option 2: Print if to a PDF printer, such as Adobe Distiller.
Option 3: Use HTML2LRF http://www.mobileread.com/forums/showthread.php?t=8368
Option 4: Use RSS2Book that converts RSS feeds and HTML pages. See: http://www.mobileread.com/forums/showthread.php?t=7946
Option 5: Use FlatLRF See: http://monalipse.sourceforge.jp/tmp/lrf/
Option 6: Use zinepal.com at http://www.zinepal.com
Option 7: Use BBeB Binder. It converts HTML and text to lrf. You can interactively modify the HTML before converting to lrf: http://code.google.com/p/bbebinder/

Sony's PDF Creation Guide for the Sony Reader: Creating PDFs for the Sony Reader
Format the PDF for an 88.184mm x 113.854 mm screen (in Portrait mode.)
Use a 12-20 point font.
Almost anything can be saved as a PDF using a PDF printer, such as Adobe's Distiller, or any free clone of that commercial program.

1. Open the file in a word processing program.
2. Set the font between 16 and 18 point.
3. The PRS-505 will ignore in-line images.
4. (Optional) If you run your RTF file through wordpad on a PC or TextEdit on a Mac it slims down the file size, and gets rid of some compatibility issues on some files.
5. Save the file as a RTF document.

To quickly get a book into the PRS-505, if that book is not available in a format the PRS-505 supports... try the following:
1. Use an OCR cradle to take photos of each page. Grey scale JPGs are ideal.
2. Load the photos onto a memory card, and use the image viewer to read the book.
3. Zoom in to (L) magnification, and use landscape mode.
The downside is that navigation between pages is very slow.
You also have the option with some books to OCR the pages, but that takes a lot more time doesn't always work. (Think of OCRing a math book.)

The PRS-505 will not operate while plugged into USB.
The PRS-505 will not turn on ... Try charging it first, especially if this is the first time it has been used. Plug the USB cable in and see that the red LED next to the power switch comes on. When the red LED goes off, the PRS-505 is fully charged. Unplug it from the USB connection, and turn it on.
The PRS-505 is not responding, or is very slow ... The PRS-505 can take several seconds to respond to button pushes. Wait for a minute. If the reader is reading a memory card, it will show spinning arrows in the center of the display. It can take several minutes to read the contents of a memory card. If the reader is not reading a card, and repeated button pushes still get no response, try resetting the Reader through the reset hole on the back.
The battery life is very short – not even one day ... The audio player will drain the battery this quickly. Either recharge often, or turn off the audio player.
PDFs are so small as to be unreadable ... The PRS-505 sizes PDF pages to the Reader's (tiny) screen. First, if you are in portrait mode, hold the button labeled with a magnifying glass for 5 seconds to change into landscape mode. You will only see half a page at a time, but it will be enlarged. Second, at the bottom of the screen, you will see a circle with an "S" or a "M". If you see the "S", press the button labeled with a magnifying glass for half a second. This will reflow the PDF using the medium sized font.

Note: Some have reported that this does not work. You may need to return your reader to Sony.

1. You're stuck at "Reader starting up"
2. Paperclip the reset button then slide the power toggle.
3. When the screen goes blank, quickly connect the PC usb cable.
The Reader should reboot and show the USB connect in a minute or so, then you can use the Sony Updater to reflash your Reader.

One common complaint with the PRS-505 is the tiny text. There is a zoom button, but its functionality is limited. Pressing it quickly will toggle between small (S) medium (M) and large (L). (PDFs only support (S) and (M).) Holding down the zoom button for at least 5 seconds will toggle between landscape and portrait mode.

Traveling with the PRS-505

The PRS-505 battery has a very long lifetime, if the audio player is left off. Therefore, charging should be rare. A single USB-A to USB-Mini-B & PSP charger "Y" cable will allow you to charge the reader when it is not in use. This cable also allow the transfer of files to the PRS-505's internal memory, SD card, and MSPD card. In other words, your entire traveling setup should be the PRS-505 in a case, and a single cable.
If you plan to use the audio player, add in headphones and plans to recharge frequently. A USB charger that plugs into the wall, a cigarette lighter, or an airplane, would be wise.

Sony has been selling e-book devices since 2004. The predecessor of the Sony Portable Reader, the Sony Librie, was sold only in Japan [1] and was the first E Ink-enabled eBook device at that time. The Librie failed to be successful mainly due to its limited availability and to lack of content.

For specifications on the display technology see: E Ink display

To compare this device with other E-INK devices see: E-book Reader Matrix

Sony's Manual for the PRS-505: http://esupport.sony.com/US/perl/model-documents.pl?mdl=PRS505

Sony's Tutorials for the PRS-505: http://esupport.sony.com/US/perl/model-tutorials.pl?mdl=PRS505

Where to Buy The Reader

eBook Applications is an eBook Reader addon that provides many new features and basically replaces the functionality of the original reader.

See the thread: detailed guide on changing default Reader fonts for instructions on the PRS505. This can be particularly useful when adding Unicode fonts.

The Sony PRS-505 supports the ability to add notes however they do not supply a method of reading the notes when not using the device. A third party application PRS note reader can be used to read or convert the notes.
Retrieved from "https://wiki.mobileread.com/w/index.php?title=PRS505&oldid=48654"
Categories: