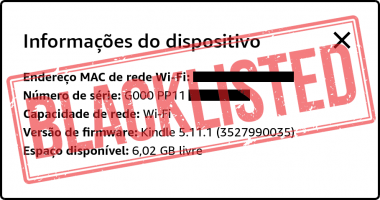 Blacklist is the term used to designate Amazon Kindle devices that were blocked from being registered because they were refunded, replaced, reported as lost or stolen. Blocking occurs through the Serial Number. If a device has been blacklisted, it is impossible to reverse this, except on some occasions where the lost/stolen device returns to the original owner.

Blacklisted devices also have some limitations, such as not being able to change the device name, access advanced settings, access Whispernet, create collections, view Wikipedia summaries and make translations, etc. Basically the device will only be able to access the internet trough the Experimental Browser (Wi-Fi) and read sideloaded books, transferred from a PC by USB cable, in the "documents" directory, manually or using programs such as Calibre.

Remember that the use of a Blacklisted Kindle can be considered a crime, and you are responsible of all you do with it.

Be careful when buying a used Kindle, there are many cases in which the devices were bought blacklisted, but don't worry, this guide will help you:

[edit] How to identify a Blacklisted Kindle