From MobileRead
(Redirected from Wide color)
Jump to: navigation, search

HDR stands for High Dynamic Range and is used to describe graphics imaging.

The idea of HDR is to provide a wider dynamic range for brightness (luminance) of an image and to prevent an area of the image to swamp the entire image as so often happens in digital pictures. For example the image of the a light source can overpower the entire image so that the rest of the image cannot be seen. The human eye is able to adjust this much better than a typical digital image. HDR attempts to mimic the human eyes ability by replacing a linear brightness with a dynamic wide range capability. HDR cameras that use the pixels themselves to capture the full depth image typically use CMOS sensors instead of CCD.

The term has also been applied to linear color images when the color samples exceed 8 bits per color. This is more properly called #Wide color or Deep color.

HDR is a format that may be carried as a RAW format internally to the Camera. In order to have a wider range of values for brightness of the various colors of the image there is a need for more range. A typical range for the brightness of an standard digital image is a range of 1 byte, or 256 values linear integer. To accomplish HDR the value is stored as a floating-point number. A full floating-point number needs 32 bits but a lower resolution number can be stored in 16 bits (sign bit, 5 bit exponent, and 10 bit mantissa (11 bits implied)). In addition the value is not linear but a compressed format similar to how the human eye would see the image. This will typically be converted to a TIFF or JPG file for final viewing since most image viewers cannot deal with HDR, see tone mapping.

HDR is useful in both still and video photography. There are some formats that can fully store an HDR image.

This is the name of a Google implementation of HDR. This provides HDR and also low light capabilities. This is accomplished by taking multiple images with a bracket of exposures both under and over exposed. The set of pictures are then overlapped and processed into the final image. This can be done in an Android app or in some dedicated cameras such as the General Imaging X600-BK by General Electric.

This is also what Apple calls HDR: HDR (High Dynamic Range) helps you get great shots in high-contrast situations. An iPad takes multiple photos in rapid succession, at different exposure settings—and blends them together. The resulting photo has better detail in the bright and mid-tone areas.

Many cameras have a feature called AEB which stands for Automatic Exposure Bracketing. It permits 3 (or more) consecutive images in the order of standard exposure, under exposure and overexposure compensation. This automatic mode was originally intended to allow selecting the best result after the pictures were made. However, it can also be used for HDR+ image capturing. Some cameras are more effective than others at this. The important specifications are how wide the exposure bracketing can be (usually a full F-stop or more is needed) and how quick the camera can take the images. A stabilizer may or may not work for quickly shot bracketing. Note that over/under exposure can be done several ways. For HDR use the only one that works is to vary the time setting of the exposure. Varying the aperture would also vary the depth of field thus rendering the HDR image much more difficult to create.

Once you have a HDR image you will need to display it. Typical graphics display tools and printers do not have the dynamic range needed to properly display the image. Tone Mapping is a technique of mapping the image into a form that can be displayed. It can be converted while preserving or exaggerating local contrast for artistic effect. The overall effect, when done properly, can result in a better displayed image. These tools work by maximizing the compressed image into an existing format using techniques such as gamma correction to match the chroma values to reasonable linear values. The result can lift a dark area of the image and/or tone down a bright area automatically. Some Cameras that have HDR+ support will automatically use internal tone mapping to save the image in a JPG format per EXIF standards. 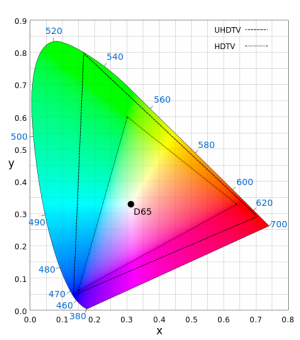 Wide color is available in the new Apple products and the latest UHD Blu-Ray format. The iPhone X has an HDR screen. This is 10 bits per color officially called Wide Color Gamut. It is 4x the existing 8 bits per color at 1024 choices per color but is still linear in so far as brightness is concerned. It is a key component in HDR support but still not nearly as wide as actual floating-point color support. Like other HDR color techniques this is only supported on limited displays and internal formats such as RAW images. Apple uses HEIF format internally.

HDR is also coming to video. It is the latest feature being added to UHD (Ultra High Definition) TV signals. Not all UHD compatible sets can handle HDR. In addition there are two competing standards. One is called HDR10 from the UHD Alliance and the other is called Dolby Vision from Dolby. One or both of these will be made available in the latest Ultra-HD Blu-Ray format on new UHD players. UHD requires 4X the bandwidth of HD and HDR will at least double that number. Wide color is also supported in the new Blu-Ray format.

Dynamic HDR makes the dynamic range variable instead of static. Additional metadata for each scene or frame tweaks the dynamic range of the picture to best fit the content. These adjustments let dark scenes show more shadow detail and bright scenes show more highlight detail by giving the video more flexibility and control within the light and color ranges of each scene.

HDR10+ is the most prominent dynamic HDR standard, first pushed by Amazon and Samsung and getting increased adoption from other manufacturers and studios. HDR10+ is currently possible through HDMI 2.0 connections and is available on Samsung's 2017 and 2018 flagship TVs, but the increased bandwidth of HDMI 2.1 ensures future compatibility for any further dynamic HDR standards or expanded HDR10+ content.

Hybrid Log Gamma, HLG, solves two problems that exist with other HDR Video technologies. First, existing HDR solutions like Dolby Vision and HDR10 aren’t suitable for broadcast signals. Second, no other existing HDR technologies are backward compatible, meaning that not only are owners of older TVs out of luck, but content needs to be produced in both HDR and non-HDR varieties to meet the needs of all customers.

In order to show something in HDR, your TV needs to know how to display the signal. Both HDR10 and Dolby Vision use metadata to tell your TV how to display colors and assign brightness parameters. The problem is that TVs that don’t support HDR can't use this data and therefore can't display any image properly.

HLG takes a different approach. Instead of starting with an HDR signal, HLG begins with a standard dynamic range (SDR) signal that any TV can use. The extra information for HDR rendering is added on, so an HDR TV that knows to look for this information can use it to display a broader range of colors and a wider range of brightness. To get a little more technical, HLG uses the same gamma curve that an SDR signal uses but adds a logarithmic curve with extra brightness over the top of the signal, hence the “log” and “gamma” in Hybrid Log Gamma. The means that only one version of the source signal can meet the needs of all TVs. For this reason this is the method adopted by Broadcast services.

Not everything about HLG is perfect. Due to the way HLG handles low light, it can’t enhance darker parts of an image the way that HDR10 or Dolby Vision can. Basically, HLG can make images brighter and more vivid, but the blacks remain the same as an SDR image. The other problem is that TV's using the earlier versions of HDR cannot use this version without a firmware upgrade.