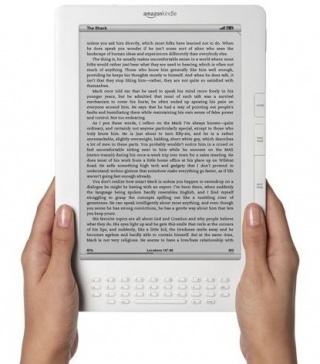 The Kindle DX offers a 9.7" (24.6 cm) display using E Ink with EVDO (cell-phone style) connection to permit purchase and download of eBooks. This means that no computer is needed for the Kindle although a USB connection is provided so that a computer can be used with this device. A keyboard is built into the device which can be used to add notes to documents. DRM is supported only on AZW and TPZ files. Version DX is otherwise similar to the Amazon Kindle 2 a new faster controller chip and include TTS (Text-to-Speech) capability.

A newer "graphite" colored device has been released in July 2010. It features the new E Ink Pearl display with an increased contrast of 10:1, an increase over the current 7:1.

Kindle DX can read to you. With the new Text-to-Speech feature, Kindle can read every eBook, blog, magazine, and newspaper out loud to you, subject to permission from the Author/Publisher. You can switch back and forth between reading and listening, and your spot is automatically saved. Pages automatically turn while the content is being read, so you can listen hands-free. You can choose from both male and female voices which can be sped up or slowed down to suit your preference. Anything you can read on Kindle, Kindle can potentially read to you, including books, newspapers, magazines, blogs and even personal documents. In the middle of a great book or article but have to jump in the car? Simply turn on Text-to-Speech and listen on the go. The Kindle DX has built in stereo speakers on the bottom of the unit and a headphone jack for portable use.

Kindle DX can also adjust the width of the displayed text. The screen is so wide that some may prefer a narrower line for ease of reading without turning their head. Screen rotation is automatic (may be turned off) so that you can turn it sideways for landscape or upside down to put the next page button on the left.

Here are some guesses as to the internal hardware based on examining the Linux source code and other data (applies mostly to Kindle 1):

Some Amazon Kindle devices include a cell-phone-type data service that Amazon calls Whispernet. There are some recent version that have "Wi-Fi" only models. The newest units supports only the 3G service but Whispernet itself can work with older units using EVDO as well. International sites use 3G service and include VAT in the price of the book but the download is still free. If you are using Roaming such as visiting Europe with your US based product you will be charged $1.99 to download a book.

This service was available on Amazon Kindle 1 and Amazon Kindle 2. It used EVDO facilities from Sprint but the user does not need to sign up for the service. It provides free download of purchased eBooks and free browsing of the Wikipedia encyclopedia. This is a wireless service and may be turned off independently from the device itself. Note that the International version first available on the Kindle 2 and later the Kindle DX had both Sprint and AT&T 3G service. In January 2010 they announced 3G wireless with fallback to EDGE/GPRS coverage (lower speed).

Some other formats can be converted to Kindle format by sending them to Amazon's web site. This user converted content can also be optionally be downloaded via Whispernet for USD$.15 per Megabyte in the US and USD$.99 per megabyte internationally. User content conversion is free if you don't use Whispernet.

Formats that can be converted include:

Note that the cost is per MB (rounded upwards) and by email. In other words, two emails with 400KB each, costs USD$1.98 in total. But a single email with two attachments of 400KB each, for a total of 800KB for that mail still costs USD$0.99.

Note that it is possible to convert .ePub and .PDF files on the Kindle 2 itself using a program called Savory. The files can be downloaded via the built-in Kindle browser and are then converted on the fly.

Whispersync technology will automatically sync your library, last page read, bookmarks, notes, and highlights across your Kindle devices and Kindle software readers. On Kindle Fire, Whispersync extends to video. Start streaming a movie on Kindle Fire, then pick up right where you left off on your TV - avoid the frustration of having to find your spot.

Whispersync can work over Whispernet or Wi-Fi.

Amazon now owns Audible and has a feature for some of their Kindle apps called Whispersync for Voice. It is designed to allow you to read in an eBook and then switch to an audiobook or vice versa without losing your place in the book.

You must own both versions of the book for this to work. However, they need not exist on the same device. You can sync between different devices and then switch device to continue reading or listening. It is also described at Whispersync devices where a list up supported devices and apps is shown. Amazon will sometimes discount the audible version for people who already own the eBook version.