From MobileRead
(Redirected from IPad Air 2)
Jump to: navigation, search 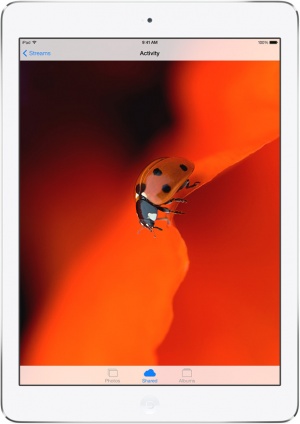 The iPad Air is the 5th generation of the iPad. It differs from its predecessors in dramatically reducing the weight to 1 lb (1.05 for the cellular version.) Metric weight is 469g and 478g. It uses the A7 chip with 64-bit architecture and M7 motion coprocessor which is the latest CPU from Apple for iOS. While the screen is the same size as existing iPads the overall dimensions have been reduced to 9.4 inches (240 mm) x 6.6 inches (169.5 mm) * 0.29 inch (7.5 mm). This reduction is .1 in height, .71 inches in width, and .05 inches or more in thickness depending on the older model. The base price is the same but now includes all of the Apple apps.

The iPad Air 2 makes several important changes to the iPad Air. The full #Specifications are shown below.

In March 2016 Apple released a new 9.7" device called the iPad Pro, a smaller version in the Pro line of iPads. It looks and feels identical. The features of the Pro, not in the Air 2 include:

The regular iPad line replaced the Air 2 with a New iPad 2017 model. The size and weight reverted to the older Air 1, but the processor is newer and faster.

Improvements over the iPad 4 include the weight and dimensions include a new processor chip, better Wi-Fi, better cellular service in addition to the suite of new Apple apps: iPhoto, iMovie, GarageBand, Pages, Numbers, and Keynote. They also had better cameras.

The A7 chip with the M7 coprocessor takes iPad Air to new heights of power and speed. Thanks to the A7 chip, apps run faster. Games are more responsive. And everything you do with iPad Air feels quicker, because it is quicker. Up to twice as quick, in fact. But that’s just the beginning. It also supports OpenGL ES version 3.0, enabling detailed graphics and visual effects once possible only on desktop computers and game consoles. And the A7 chip features 64-bit architecture, opening the door for even more robust and powerful apps. Which means even more possibilities for what you can do with iPad Air. The M7 coprocessor makes so much sense as it measures motion from your iPad Air by pulling data from the accelerometer, gyroscope, and compass. So your apps can give you a better experience based on the movement of your iPad Air. It’s a task that would normally fall to the A7 chip. But M7 is more efficient at it, which saves on power.

Using a newly designed A8X chip for the iPad Air 2 which was a high-end 3-core variant of the A8. Apple claims the 64-bit chip delivers 40 percent faster CPU performance than last year's A7, along with more than double the graphics performance due to the PowerVR GPU 8 core graphics chip. The graphics processor is used extensively in the photo app. It also uses the Apple M8 motion co-processor which has a barometer and is the first generation of the iPad to inherit the fingerprint Touch ID sensor from the iPhone 6. It includes an improved 8-megapixel (3264 × 2448) rear-facing camera with 10 fps burst mode and slow motion video at 120 fps.

iPad Air gives you up to twice the Wi-Fi performance thanks to two antennas and MIMO (multiple-input multiple-output) technology. With dual-band (2.4GHz and 5GHz) 802.11n Wi-Fi and MIMO, download speeds can reach up to 300 Mbps — double the data rate of the previous-generation iPad. So now when you want to download a movie, share photos or documents with AirDrop, or just browse the web, your connection is even faster than before.

Performance of the iPad Air 2 has more than doubled again to 866 Mbps using an 802.11ac wireless router with MIMO support.

iPad Air with Wi-Fi + Cellular lets you connect to the Internet even if you’re away from a Wi-Fi signal. iPad Air supports even more LTE bands to connect to more cellular data networks around the world. Now you can get online at really fast speeds — faster than broadband in some cases — in more places. And plans are flexible, so you don’t have to sign a contract. Some plans even let you share data across multiple devices. Cellular costs $130 more than equivalent Wi-Fi only model.