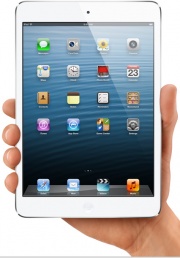 The iPad mini 1 is a miniature version of the iPad 2 with a better back camera (5MP) and 1 GB RAM. For this reason no new software will be needed to support this product as electronically it looks like a iPad 2. A WiFi and a WiFi + cellular versions are offered. Siri is supported. It also support Bluetooth version 4.0. Initial OS: iOS 6.0. It is the first to use the lightning connector.

The iPad mini 2 adds a Retina display at 4X resolution at 326 ppi. The thickness increased to 7.5 mm or .01 inches to accommodate a larger battery and the weight increased by .05 lbs. (.8oz). The processor was upgraded from an A5 to an A7 (64bit). The iPad mini 2 includes all the Apple apps for free. It shipped with iOS 7.

The iPad mini 3 adds a fingerprint recognition feature and drops the 32G option but has a 128G option. It shipped with iOS 8.

The iPad mini 4 gives the mini nearly the same performance and the iPad Air 2 with the faster A8 CPU and M8 coprocessor. It has the same screen lamination and antireflective coating as the iPad Air 2. It also sports an 8 Mpixel back camera with 3264 × 2448 resolution. It originally shipped with iOS 9. Only the 128GB is currently offered. It is supported by iPadOS.

The iPad mini 5 has the A12 Bionic chip with Neural Engine. A 7.9‑inch Retina display with True Tone and Apple pencil support. Bluetooth 5.0 is supported. It originally shipped with iOS 12. It offers 64GB or 256GB. The front camera upped to 7 Mp. It is supported by iPadOS.

The iPad mini 6 has its own page.