From MobileRead
(Redirected from Ipad)
Jump to: navigation, search 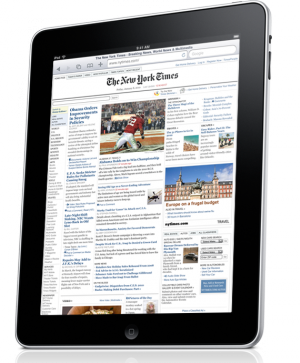 iPad is a tablet computer by Apple, Inc. This page covers the iPad 1, 2, 3 officially called the New iPad and the iPad 4. There is also a miniaturized version called the iPad mini (several versions), the iPad Air (full size with several versions), the newest iPad Air 2019 model is 10.5", and the iPad Pro as the largest version at 12.9" (A newer version is the iPad Pro 2020). The name New iPad was adopted for each subsequent iPads starting with iPad 2017 followed by iPad 2018. The newest new iPad is available for 2019 with a screen size increase of 10.2"

Proportionally and materially similar, the iPad resembles a large iPod touch. Compared to similar devices this would rank as a Web Tablet. It will run most all applications designed for the iPhone OS including the Kindle Reader app. It includes or allows a free download of an iBooks application that provides ePub and PDF support.

For a list of eBook Reader choices see iPhone and iPad applications. Note that some iPhone applications will need FullForce installed to use the full screen.

The iPad 1 was announced on January 27, 2010 and delivered shortly thereafter. Its features include:

See Specifications for more information on the iPad 1 and common features.

The iPad 3 was announced March 7th 2012 for release on March 16th. The high res screen means the performance isn't much better than the iPad 2 version. The list of changed features include:

The New iPad introduced November 12, 2012. It used a brand new A6X processor which Apple said "delivers up to twice the CPU performance and up to twice the graphics performance of the A5X chip" found in the existing new iPad 3. This iPad also got the smaller Lightning Connector. Apple promised 10 hours of battery life "in the same thin and light iPad design." The updated iPad also includes a FaceTime HD camera, twice the Wi-Fi performance compared to previous iPads, and support for additional LTE carriers worldwide. This is also referred to as the iPad Gen 4 or 4th Generation iPad. The 5th generation is the iPad 2017. The intervening years introduced the iPad Air and iPad Pro models as well as the iPad mini models.

Except as noted above the specifications are the same for the three models.

For eBook reading software that can run on iOS see E-book software#iPhone and iPad.

There is also a chart on Wikipedia.

The Keyboard Dock is a dock for charging your iPad, integrated with a full-size keyboard. The dock has a rear 30-pin connector, which lets you connect to an electrical outlet using a USB Power Adapter, sync to your computer, and use accessories like the Camera Connection Kit. And an audio jack lets you connect to a stereo or powered speakers.

The iPad Case not only protects the iPad, it can be used in various positions. So it’s easy to type, look at photos and slideshows, or watch movies.

It has also been discovered that the Apple Camera Connection Kit USB port has provided unofficial support for wired USB-based computer keyboards for direct text entry and also wired USB-based headsets for use with VoIP applications.

The 10W USB Power Adapter lets you charge your iPad directly through an electrical outlet. And the 6 foot long power cable allows you to charge it from an even greater distance.